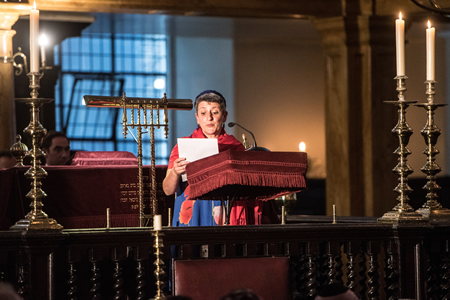 Over 250 people gathered at Bevis Marks Synagogue in London’s East End on Thursday 30 June to honour the thousands of British Jews, men and women, who served their country in the First World War, on the centenary of the night before the first day of fighting of the Battle of the Somme.

Representatives from across the Jewish community came together to remember British Jews whose lives were sacrificed in the carnage that followed, on the worst day in British military history.

With contributions from The Lord Sterling of Plaistow GCVO CBE, Rabbis Joseph Dweck and Shalom Morris of the S&P Sephardi Community, Rabbi Laura Janner- Klausner of Reform Judaism and Rabbi Danny Rich of Liberal Judaism, AJEX, JLGB, the Board of Deputies, the Heritage Lottery Fund, We Were There Too, members of the Sephardi and Portuguese Community, Rabbi Livingstone CF, Principal Jewish Chaplain to HM Armed Services, and acting Jewish British servicemen, the commemoration included readings, war poetry, a recital of the names of 34 British Jewish soldiers who died on 1 July 1916, and buglers sounding the Last Post and Reveille.

The moving ceremony was preceded by the launch of The Jews of London – We Were There Too, a unique Heritage Lottery Funded cross-community project. Its aim is to capture, record and preserve the impact, experience and contribution of London’s Jewish communities during the First World War era, on a newly created, interactive, digital platform.

Alan Fell, Project Director said: “Never has it been more timely to remind ourselves and others that the Jewish community has contributed to the fabric of British society for a very long time and continues to do so”.