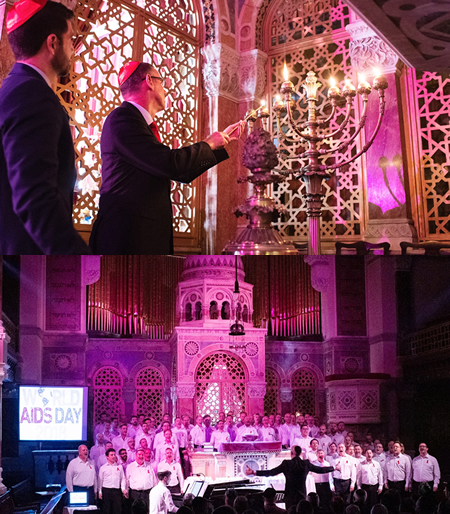 The service was followed by ‘Beacons’ a concert by the London Gay Men’s Chorus.

🕯Joined @tweetWLS🕍 for a moving #WorldAIDSday service & concert starring @LdnGMC, during which I joined the Director of @IsraelAIDStf🇮🇱, @CShmilo, lighting the menorah in commemoration.

We must continue to work to reach #ZeroHIV transmissions & end stigma globally. pic.twitter.com/XUzL6neSd4

Maya Levy sang Freddie Mercury’s ballad ‘Love of My Life’, as the conregagation watched dozens of images of ‘beacons’ from the history of HIV AIDS, such as Diana, Princess of Wales, Elton John, Elizabeth Taylor, and of the work being done to support communities in Africa, Brazil, India, and Russia. One particularly poignant image was of Saar Maoz, formerly a Chorus member and now Deputy Director of IATF.

In another part of building at the same time, WLS were hosting dozens of guests in their Winter Night Shelter, giving protection to these vulnerable people without homes from the harsh winter weather, offering them a hot meal and comfortable bed and a willing listener for the night.