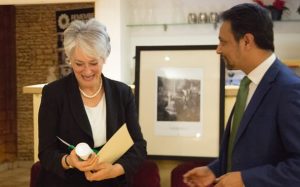 Rabbi Sybil Sheridan was presented with an award for ‘Building Awareness with Faith Communities’ recognising the work of West London Synagogue (WLS) in raising awareness of the genocide in Srebrenica in 1995.

WLS held three commemorations in July to raise awareness of the systematic massacre of some 8,000 men and boys in 1995, in the Bosnian town of Srebrenica, the rape of large numbers of women, and the forced deportation of thousands of women, children and the elderly.

An exhibition of powerful paintings by the artist Robert McNeil MBE was held alongside a special screening of the documentary ‘The Fog of Srebrenica’ followed by a discussion with the film’s Director Samir Mehanović. This was followed by a special Kabbalat Shabbat Service with memorial prayers and a personal testimony by Safet Vukalić, a Srebrenica survivor.

There were four institutions nominated for the Remembering Srebrenica award. As well as West London Synagogue, the East London Mosque, St James’ Church, Piccadilly, and Northwood and Pinner Liberal Synagogue were nominated.

Rabbi Sheridan said: “I was thrilled to accept the award on behalf of the West London Synagogue. My thanks go to Jim Fletcher who single handedly put together a stunning series of events over the weekend for Remembering Srebrenica. It is a sobering thought that despite our watchword of ‘ never again’ genocide continues to be practiced all over the world. We must reach out to other victims, share our experiences and assert our common humanity and compassion for all”.