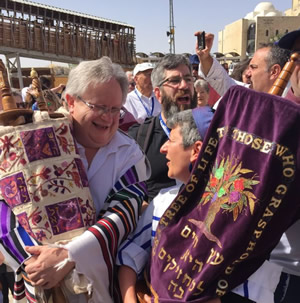 The Government of Israel’s resolution suspending the Kotel plan for egalitarian prayer and promoting the conversion bill endangers the unity of the Jewish people and undermines the Zionist vision of a Jewish state for all the Jews in the World, in the spirit of Herzl, Ben Gurion, and Jabotinsky. In the year, in which the British Jewish community marks the 100th anniversary of the Balfour declaration, we are saddened to see the Israeli government turn their backs on millions of Diaspora Jews.

By suspending the landmark Kotel (Western Wall) agreement, the Cabinet has chosen to reject the practices and traditions of millions of Jews around the world. The 50th anniversary of the Six Day War reminded us that the Kotel is more than a historic place of prayer. It is a symbol of the unity of the Jewish State and the Jewish people. When the Cabinet chose to hand control over prayer at the Kotel to a single group rather than protecting the rights of millions of Israeli and Diaspora Jews to pray according to their denominational customs, it sent a clear signal to Diaspora Jewry that our voice does not count and will not be heard. As Jewish Agency Chairman Natan Sharansky put it: “The message that the government has sent to world Jewry in its decisions is that ‘you are not part of us.’”

Perhaps even more importantly, the ministers’ approval of a bill that would give the Rabbinate a monopoly on conversions is a slap in the face of Diaspora Jews and the approximately five thousand Israeli children born each year whose Jewish status will now remain uncertain. The British Jewish community fought hard for the rights of refuseniks to live full Jewish lives. To know that the government of the Jewish State is turning its back on the children and grandchildren of the people we fought for is a travesty.

To fine out more or to learn how you can help, please contact the Progressive Alliance Israel Desk at allianceisraeldesk@gmail.com.