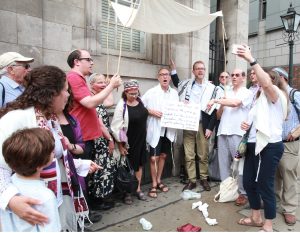 Representatives from Reform, Liberal and Masorti movements demonstrated their outrage at the treatment of Rabbi Dov Haiyun of the Masorti movement’s Moriah Conservative Congregation in Haifa, who was detained for performing non-Orthodox weddings.

Israel is the only democracy in the world where a Progressive Jew cannot marry in the way that they wish. Anyone conducting a wedding that isn’t strictly Orthodox could face up to two years in prison. There is no civil marriage in Israel, all marriages must be conducted in a religious manner and Jewish marriages may only be conducted under the auspices of the strictly Orthodox rabbinate.

Under the chuppah, rabbis from Liberal, Masorti and Reform Judaism smashed a glass, the symbolic ritual that occurs at the end of all Jewish wedding ceremonies. The act was one of outrage and of defiance, as progressive clergy came together in support of their embattled colleagues in Israel.

“I’m shocked at the pre-dawn police interrogation of Rabbi Dov Haiyun for the ‘crime’ of officiating at Masorti weddings. Masorti Judaism in the UK calls on the Israeli government to end all harassment of non-Orthodox Jews and to ensure complete freedom of religion within the Jewish State.”

Rabbi Aaron Goldstein, Chair of the Conference of Liberal Rabbis and Cantors said:

“This arrest and its manner was not Shem Ha’Shamayim – for the sake of heaven. In a week when the Israeli Government has decided to discriminate against the LGBT community and Arabs, challenging the democracy of the State, it has also decided to police Judaism.”

Rabbi Fabian Sborovsky, Chair of the Assembly of Reform Rabbis and Cantors said:

“Once again we have seen the true face of the ultra-orthodox monopoly of the Chief Rabbinate of Israel. Progressive rabbis and Jews around the world stand united against the appalling treatment of our colleague at the hands of the Israeli rabbinate. We call on the government of Israel to uphold the values and founding vision of Israel’s Declaration of Independence to ensure freedom and equality of religion for all.”