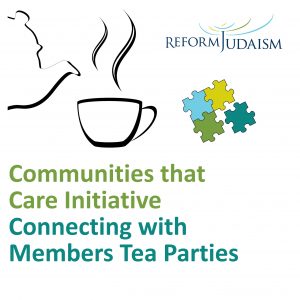 In the six weeks leading up to Pesach, Reform communities took part in our Connecting with Members Telethon. The Telethon was part of Reform Judaism’s Communities that Care Initiative, launched in 2016 to strengthen communities and inspire members.

The Telethon involved community members themselves calling other members of their congregations to wish them chag sameach, a happy Passover, ensuring that everyone who wishes has a seder to go to and listening out for signs of isolation and loneliness. For some communities this is an established practice that now they can celebrate as part of a movement-wide initiative and for some it has inspired a new adventure which has benefited both the volunteers and the members who received the calls.

The Initiative continues to raise awareness of issues of loneliness and isolation and build relationships between our members. Connecting with Members Tea Parties on the 4 or 11 June are our next project as part of the Communities that Care Initiative.

Have you been to synagogue lately and noticed some of those who used to be regulars are no longer there?

At these tea parties, as we combat loneliness and isolation, we will be reaching out to exactly those people whose seats are empty. They might be elderly, a single parent or recently bereaved; let’s reach out and support them back into our community.