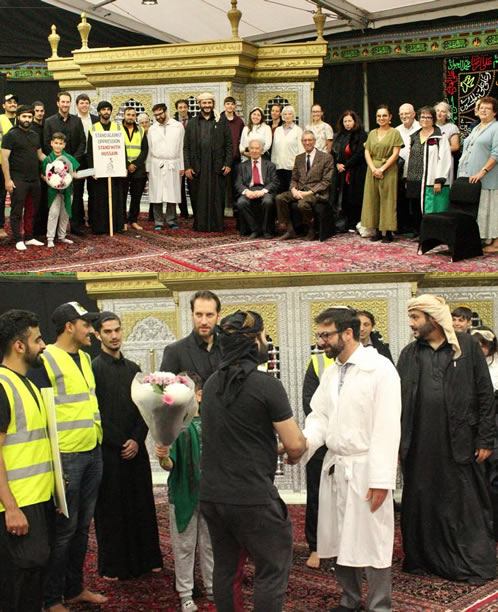 20 leaders from Shir Hayim and the Willesden Minyan, two progressive Jewish communities based in North West London, yesterday visited the Al-Majlis Al Husseini Association, who recently suffered a hate crime attack in which three people were injured. The Yom Kippur visit was intended as a gesture of solidarity and care as neighbours.

The Al-Majlis Al Husseini Association, a Shia community in Cricklewood, suffered the attack on the evening of 18th September, when the driver of a car drove into a crowd outside their centre shouting Islamophobic abuse. The community had been hosting their annual lectures in commemoration of the martyrdom of the grandson of the prophet Muhammed, Hussain. Two congregants from community were hospitalised. The Metropolitan Police have described the incident as an Islamophobic and racist hate crime.

The following day – the Jewish festival of Yom Kippur and the day of the eve of Ashura, a Muslim commemoration of the 10th day of the month of Muharram – Shir Hayim and the Willesden Minyan visited the association to share flowers and their express their solidarity. The group were warmly received as they asked for the names of the injured for the Jewish prayer of healing.

Mustafa Al-Balaghi, a member of the Al-Hussaini Association said: “Brothers and sisters, thank you – it is very much appreciated. I want you to know – we would have done the same for you. If you were attacked, we would come to stand alongside you”.

Rabbi Daniel Lichman said: “Our community was shocked by the news of this devastating hate crime, committed against a community who had gathered, like us, for religious practice on a sacred day. It was clear that we should reach out in solidarity, offering comfort in any way we could to our neighbours. There at the association’s centre I listened to the experiences of one man who had jumped out of the way; I heard another speak of being the first to tend to the injured. I heard their shock and fear. We offered a traditional Jewish prayer for healing and prayer for peace”.

Debbie Danon, co-chair of the Willesden Minyan said: “When we heard about the hate attack, it wasn’t even a question for us. We knew we had to do something to show our support as Jews and as neighbours – not in spite of it being Yom Kippur, but because of it. Just the night before at Kol Nidrei, as co-chairs we made an address talking about the need to repent for our silent complicity in hatred and dehumanisation of others. We shared the quote from the late Holocaust survivor Elie Wiesel, ‘We must take sides. Neutrality helps the oppressor, never the victim. Silence encourages the tormentor, never the tormented.’ This was our chance not to just send silent prayers, but to show up for our neighbours at the Al Husseini community. Mustafa, Taqwa and the whole team there were welcoming and generous. Our friends at Shir Hayim also invited Al Husseini leaders to share a meal in the Sukkah next week. We hope this will be a defining moment for the Willesden Minyan and Shir Hayim, starting us on a path to building strong relationships with our Muslim neighbours based on trust, hospitality and a shared vision for a peaceful city”.

Anne Kinderlerer and Martin Dives, chair and vice-chair of Shir Hayim said: “When, in the Yom Kippur service we remember our own history of oppression with many of our members who lived through it, it is vital that we stand against hate, different communities supporting each other to bring peace, dialogue, understanding and mutual respect”.