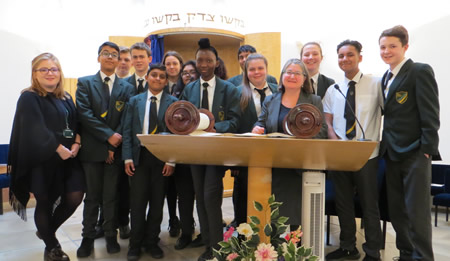 As part of their commitment to Holocaust education, over a two-day period South West Essex & Settlement Reform Synagogue (SWESRS) were hosts to over 200 pupils from local schools with presentations from Holocaust survivors and rabbis from Progressive Synagogues in Redbridge and Essex as Brenda Soskin explains.

The survivors included Rabbi Harry Jacobi, born in Berlin in 1925, who came to Great Britain from the Netherlands following a double escape from the Nazis in 1939 and then 1940. He was one of 74 children saved by Geertruida Wijsmuller-Meijer (one of the Righteous Gentiles) on the last evening before the Dutch capitulation on 15 May 1940. Another survivor who gave a presentation was Eve Kugler. She survived the Holocaust as a child, escaping Nazi persecution by fleeing France for America. Her parents were interred in four French concentration camps, twice miraculously spared from deportation to Auschwitz.

Farrel Igielman recalled the remarkable story of his father, Hillel Chill (Charlie) Igielman, who in 1939, aged 12, was interred in a slave labour camp at Radom, working 12 hour shifts making revolvers, rifles and bicycles, existing on minute rations and with a five mile walk too and from the camp. He survived Auschwitz as a slave labourer working in a V1 facility at Wehingen undertaking heavy work clearing the site of boulders. Farrell recalled that during air raids Jews were not allowed into shelters but used the opportunity to dig up carrots to supplement their meagre diet, whilst the Nazi officers took shelter. Finally, Chill was sent to Dachau on a death march at night during which Jews were shot if they could not keep up. He was finally liberated by the Americans in May 1945 aged 17.

In addition to these moving stories, Rabbis Irit Shillor from Harlow Reform and David Hulbert from East London Liberal told of their families’ experience of the Holocaust including their lives after the war.

In the prayer hall, Rabbi Lisa Barrett showed the children the Czech Torah scroll, one of 1,564, which were rescued from the Holocaust by the Prague Jewish community and distributed around the world as a message of hope and resilience.

The students who attended were moved by the testimonies of the survivors and commented on the range of oral accounts and how this has given them an insight into the impact of the Holocaust for survivors, their families, and society. Some of their comments included:

“I never realised that so many countries were involved in the Holocaust, it was not just the Nazis but lots of ordinary people taking part, we need to learn from this and stand up for all people to stop this happening again.”

“I was fascinated but sad to hear the speakers, I found it really interesting and touching.”

“It was useful to my understanding to have a wide range of experiences, this has helped me understand what the Holocaust was and why it is important we remember it.”

“The synagogue made us feel so welcome, it was one of the best visits I’ve been on, although sad I feel honoured.”