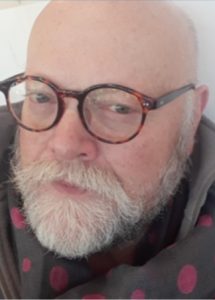 Rabbi James Baaden is one of our two co-chairs of the Assembly of Reform Rabbis and Cantors.

Rabbi Baaden spent most of his formative years in the United States and Canada.  At the end of the 1970’s James returned to the UK as a student.  During the 1980’s he worked as a journalist in the field of “religious affairs” and then worked in social research and public policy. He was also a Trade Union Officer.

In the early 1990’s Rabbi James studied at Leo Baeck College.  He was ordained in 2001 and spent eight years as Rabbi of South London Liberal Synagogue.

If you have any questions or queries, please don't hesitate to contact us. You can find full details for each of our departments on our contact page...
Get In Touch
Copyright © 2019 The Movement for Reform Judaism - All Rights Reserved
Company Registration Number: 07431950, Charity Number: 1139806
Affiliated with the World Union for Progressive Judaism &
the European Union for Progressive Judaism
Web Design by Friendly Gorilla
This website uses cookies to improve your experience. We'll assume you're ok with this, but you can opt-out if you wish.Accept Read More
Privacy & Cookies Policy