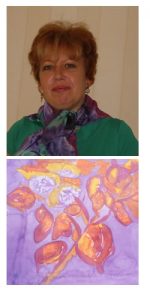 Jane, a former local newspaper journalist, from Rickmansworth, specialises in paintings – which are professionally stretched on frames – as well as ties, scarves and hairbands. She has sold her work at craft fairs, local galleries and exhibitions as well as on commission. A member of the Guild of Silk Painters and Watford Area Arts Forum (WAAF) she has also exhibited her work at the Camden Arts Festival, Willesden Green Library Centre and Northwood Craft Market. The most notable recipients of her ties have been Sir Richard Branson and the late Richard Whiteley of Countdown Fame.

The exhibition is at Stanmore Library, 8 Stanmore Hill, HA7 3BQ during library hours (which vary daily) from 15-27 October. Admission free.