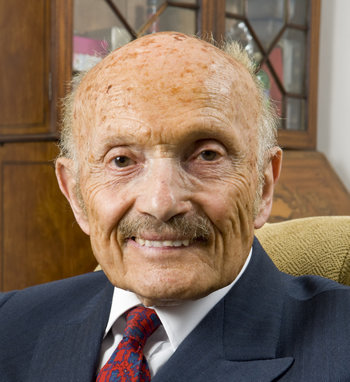 Sir Sigmund’s contribution to Reform Judaism in the United Kingdom was immense and cannot be overstated.

Sir Sigmund held the position of President of Reform Judaism from 1997 until March 2011 when he was elected as Life President.

A businessman and philanthropist who dedicated a great part of his life to serving the Jewish community and the cause of dialogue and interfaith relations across the globe, Sir Sigmund also had a long and significant involvement with the work of the Board of Deputies of British Jews.

Sir Sigmund served with distinction as sole Patron of the International Council of Christians and Jews, co-founder of the Three Faiths Forum, Vice-President of the World Congress of Faiths and co-ordinator of the religious component of the World Economic Forum. He was also an active participant in the work of Rotary International. He was knighted in 1976, appointed a Papal Knight in 1985, and awarded the Templeton Prize for Progress in Religion in 1998 for his interfaith work worldwide. His work for understanding and reconciliation between faith communities took him to every continent and has brought him recognition from nineteen countries as well as the Vatican.

We are grateful for Sir Sigmund’s enormous generosity and inspirational leadership; his legacy lives on in the Sternberg Centre which bears his name.

May his memory be a blessing.

Rabbi Laura Janner-Klausner, Senior Rabbi to Reform Judaism said: “The entire Reform Jewish community of the United Kingdom mourns on the sad news of the death of Sir Sigmund Sternberg KC*SG. Sir Sigmund’s contribution to Reform Judaism was transformational. He dedicated a great part of his life to serving the Jewish community and the vital cause of dialogue and interfaith relations around the world. We are grateful for his enormous generosity and inspirational leadership. May his memory be a blessing”.

Geoffrey Marx, Chair of Reform Judaism said: “On behalf of the Board of Reform Judaism I would like to convey our condolences to the family of Sir Sigmund Sternberg KC*SG at this difficult time. We will miss Sir Sigmund’s incredible energy and enthusiasm. His legacy will live on in the Sternberg Centre for Judaism which bears his name and in the huge impact he has had on the development of Reform Judaism and interfaith relations”.