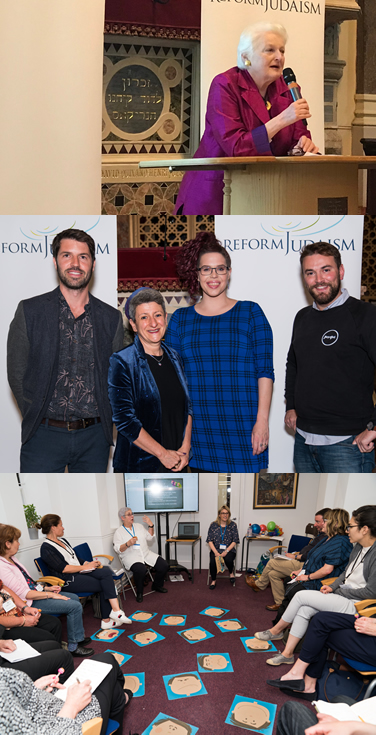 Speaking at Reform Judaism’s Mental Health and Wellbeing Conference, Rabbi Baroness Neuberger called for a multi-faith campaign for better mental health services saying: “this is a crying injustice; as a society we could and should do better”.

In her closing address, Rabbi Janner-Klausner echoed this call to action saying: “We need to campaign on mental health, to be bold and loud and look beyond our communities and campaign nationally – to name what’s not good enough such as the massive NHS waiting lists for mental health care but also to celebrate what’s good such as the prioritising of mental health by Matt Hancock, Secretary of State for Health and Social Care, who has made it a touchstone of his work.

“Let’s campaign for that policy, a clear governmental strategy with a budget to match that strategy”.

Sharon Daniels, Reform Judaism’s Wellbeing and Inclusion Manager said: “Last year our Reform communities committed to building foundations of positive mental health as cornerstones of what we do. Since then, our Communities that Care Initiative Network has been exploring ways to make these opportunities more accessible to more people. I am so proud of the ground-breaking work Reform communities are doing in addressing this incredibly important issue”.

Participant Rabbi Robyn Ashworth-Steen of Manchester Reform Synagogue said: “Being together, talking about mental health and wellbeing and hearing from inspirational activists in the field makes me feel secure in knowing that our future is bright. The stigma around mental health is shifting, our children are being gifted with a new language and understanding of themselves and our world. There is much to do but this day has energised and given me extra tools for my toolkit as a professional in our community”.

The Mental Health and Wellbeing Conference was part of Reform Judaism’s Communities that Care Initiative and took place at West London Synagogue on Thursday 23 May.