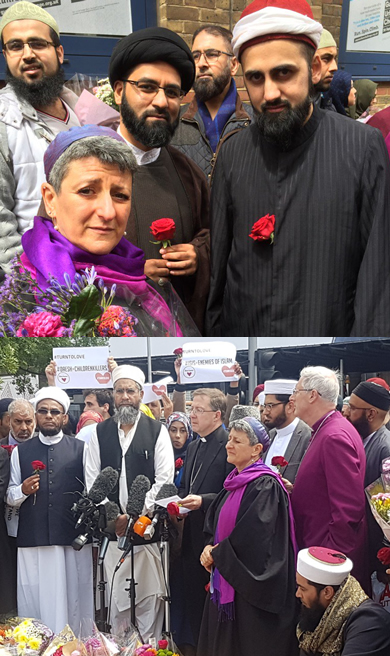 Rabbi Laura Janner-Klausner addressed a group of imams on Wednesday 7 June as they gathered to condemn the recent atrocities in Manchester and London stating that “British Jews stand with our Muslim brothers and sisters when wickedness has attacked London”.

At a British Muslim Forum event near London Bridge, the imams  paid tribute to those killed in the terror attacks and spoke out strongly against those who commit them. A statement condemning extremism and terrorist violence, endorsed by 500 imams from all over the UK, was read out publicly.

The imams also set out what they will be doing within their communities and mosques to challenge, robustly and precisely, the perverted interpretation of Islam that is put forward by ISIS and other extremist groups. They also urged people to continue to report to the authorities anyone expressing sympathy with violent extremism and reiterated their commitment to not accepting terrorists in life or death by refusing to perform funeral prayers for terrorists.

Imam Qari Asim, spokesperson for the British Muslim Forum and Imam of the Leeds Makkah Mosque, said: “We want to send a clear message to any Muslim attracted to violent extremism. This
is forbidden by your religion. There is no justification in Islam for taking innocent life. If you follow this path you are stepping away from Islam to a dark and godless place. Your views are not welcome in our mosques or in our communities. This is not a path to heaven – think of the pain you will cause, the lives you will destroy. Please, think again”.

We all weep for those we’ve lost. British Jews stand with our Muslim brothers and sisters when wickedness has attacked London. Now’s the time for the very leadership that you are modelling as Imams – modelling for Britain today, not just for Muslims, but for all British people. Judaism and Islam are linked by a great prophet, Moses. Moses showed humility in his leadership when he asked God “who am I that Pharaoh will listen to me?” Moses didn’t seek out the responsibility that fell upon him, he was unsure of his impact but with God’s strength within him, Moses overcame the enormity of his task. He was listened to. He led his people to freedom. He changed history. We have to do the same; we have to bring our message, we have to impact on our society, on the Britain that we love.

Today, the world faces a deadly threat. What can we do as leaders of communities, as leaders of people who love Britain and love and are proud of our religions? We must bring together people who disagree with each other, people who can challenge each other robustly – with words and not with violence.

We must and we will stop our people from turning towards sickening ideologies, which we have in all forms of religion, including Judaism and Islam.

Moses knew that the most influential leadership was not through grand presentations or speeches, but by meeting individuals face-to-face, in Hebrew, panim-el-panim, in Arabic wajeh le wajeh, building connections in the hearts of others. That is our work. To turn souls away from wickedness, and we are all together in that holy task.