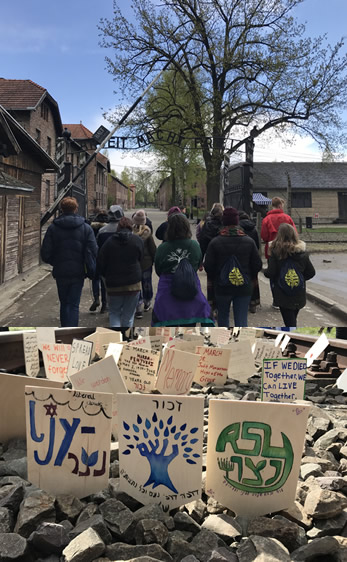 This year two movement workers from RSY-Netzer, Rhiannon Humphreys and Lucy Prevezer took 10 bogrim (senior leaders) on March of the Living, an international, educational programme that brings Jewish people from all over the world to Poland on Yom Hashoah, Holocaust Memorial Day, to march from Auschwitz to Birkenau, the largest concentration camp complex built during World War II. Here they share what made their experience so significant.

There are many reasons why you should go on March of the Living, each as valid as the next but there is something extremely powerful and special coming as part of your youth movement. We heard incredibly stories of courage, resistance, uprising and of being a part of communal group. These stories and the other education we received on the trip made us feel incredibly proud to still be a part of a youth movement whose foundations are so deeply rooted in those youth movements that were around during the time of the Shoah. We learnt about Jewish faith, about our own personal Zionism and the breaking and building of communities. All of which we are excited to bring back to RSY-Netzer to inspire the next generation of young Reform Jews. It was an incredible experience for all.

Participant Ella Janner-Klausner said: “The education and thought put into the trip meant that I felt able to place myself and my sense of purpose, amongst the chaos and magnitude of what we were learning. Instead of leaving feeling depleted, I feel more awake. More awake and more sensitive to the world.”