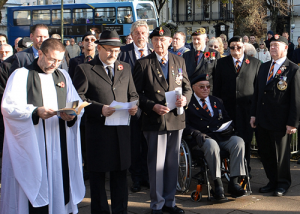 Rabbi Dr Andrea Zanardo of Brighton and Hove Reform Synagogue took part in the city’s remembrance services on Friday 11 and Sunday 13 November. It was the first time that a Rabbi has been invited to take part in Brighton’s commemorations.

In both ceremonies he read a short prayer for peace and to honour the fallen soldiers. The local AJEX (Association of Jewish Ex-Servicemen and Women) branch laid a wreath at the war memorial.

The ceremonies were led by Revd Martin Lloyd Williams, Archdeacon of  the Dioceses of Chichester and co-officiated on Remembrance Sunday only by Interfaith minister Revd Anthea Williams.

Rabbi Zanardo said: “I felt honoured to take part to such a moving event. I really appreciate how Remembrance Day is becoming more and more inclusive over the years”