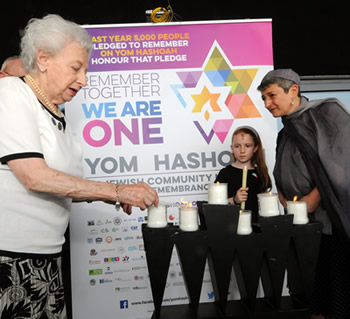 London’s New Mayor, Sadiq Khan MP joined five thousand people at Barnet Copthall Stadium on Sunday 8 May for the UK Jewish community’s national Holocaust commemoration, as part of the ‘Remember Together ?- We Are One’ campaign’ launched by Yom HaShoah UK.

“I am honoured that my first public engagement was such a poignant one, where I met and heard from Jewish survivors and refugees who went through the unimaginable horrors of the Holocaust, yet have managed to not only build lives here in London, but give so much back for the benefit of wider society,” said Mr Khan.

Survivor, Ben Helfgott MBE said: “I was moved to tears as I watched the children’s choir sing ‘Never Again’ and heard the leaders of our youth movements commit to marking Yom HaShoah propeciafinasteridestore.com each year. We are passing the baton of remembrance on to the UK Jewish community with a lot of confidence”.

Rabbi Laura Janner-Klausner said: “It was a privilege to stand alongside survivors and veterans recognising the enormous contributions they have made to British society. It is vital that each generation remembers the immense loss of the Holocaust”.

Yom Hashoah is the Jewish community’s time to internally reflect together and remember the six million men, women and children who were murdered by the Nazis. This year, the event also paid tribute to the hundreds of thousands of British soldiers who lost their lives fighting to defeat Nazism, as the ceremony fell on VE Day.

Yom HaShoah UK Chairman Neil Martin said that “Sunday was a meaningful and historic day for our community and our society at a much needed moment. We were honoured that the new Mayor of London, Sadiq Khan attended as his first public engagement and show as Londoners we stand together as one. But most importantly of all, we had the privilege of over 200 survivors, refugees and veterans joined us at the ceremony, where we could thank them publicly for all they have done for our community and country”.