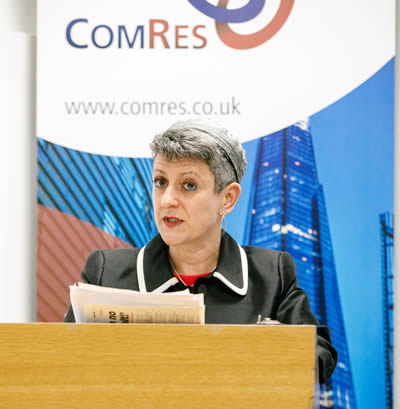 The UK’s most senior progressive Jewish leader challenged the Hungarian Ambassador to the UK on his attitude towards anti-Semitism in his country. Commenting on the Ambassador’s claim that Hungary did not have a particular problem with Jew-hate, Rabbi Janner-Klausner, Senior Rabbi to Reform Judaism, argued that a better response would have been to acknowledge anti-Semitism and lay out his government’s response. Rabbi Janner-Klausner said that the Ambassador, as a leader, should have better “owned” his country’s problem.

Speaking at a joint CNN/ComRes event on Tuesday 14 May discussing the American broadcaster’s polling of adults in seven European countries, Rabbi Janner-Klausner insisted that practical responses were needed and urged a move away from phrases like “stamping out” anti-Semitism, which she described as “old school rabble rousing”, stressing the need for a well thought through plan. We should instead discuss “opening the door” to non-Jews, she argued. Rabbi Janner-Klausner insisted that anti-Semitism must by met “with our heads and not our hearts”. She called for “difficult conversations on a national scale” in response to rising levels of anti-Semitism and praised communal organisations JPR and CST, whose research was cited throughout the meeting.

“We need to start having difficult conversations on a national scale” in response to #antisemitism says @LauraJanklaus @ComRes @CNN #ShadowoverEurope pic.twitter.com/ST1uSC0jki

According to Rabbi Janner-Klausner, practical responses to anti-Semitism included ensuring coverage is always accurate, building relationships across communities by inviting non-Jews for Friday night dinners and opening up conversations when anti-Semitic views are aired. Rabbi Janner-Klausner introduced her initiative, Real Conversations, which works with young Jews and Muslims, creating spaces for constructive discussions on potentially divisive topics, including Israel-Palestine.

The panel, chaired by CNN presenter Clarissa Ward, was convened to discuss CNN/ComRes polling indicating that anti-Semitism is a problem across Europe.