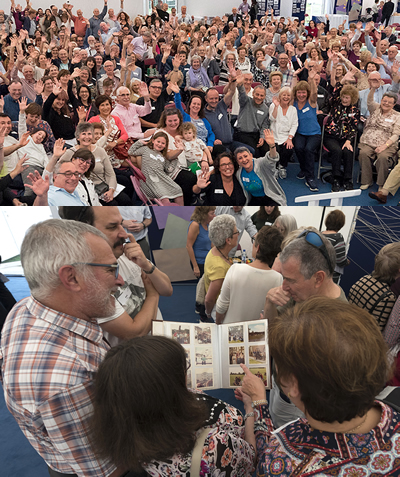 Over 300 people celebrated 70 years of Reform youth movements at the Sternberg Centre on Sunday 24 September.

2017 marks 70 years since the founding of YASGB (Youth Association of the Synagogues of Great Britain) which was succeeded by RSY (Reform Synagogue Youth) and now RSY-Netzer.

Click here to see a gallery of photos from the event

Past and present members gathered for a festival of nostalgia and reminiscence ranging in age from founding members now in their late 80s, to the very youngest participants.

Kol Chai member Pete Martin (active as a participant from 1966-1985) said: “This was an incredible occasion for schmoozing and reconnecting with old friends, many of whom I had not seen for years; it was as if I had only seen them yesterday. YASGB and RSY-Netzer really does create friendships for life”.

Amy Decker, RSY-Netzer Movement Worker said: “Being part of the 70th Anniversary Celebration allowed us to get a real sense of the history of our movement. It was incredibly heart-warming to see that people who haven’t had any involvement with Reform Youth for many years still cherish the friends they made and the values they gained”.

Rabbi Laura Janner-Klausner, Senior Rabbi to Reform Judaism said: “It is a fantastic testament to the work of our leaders and volunteers that our youth movement is still going strong with 1000 children and young people taking part in 7 Israel tours, Shemesh summer camps and Day Camps this summer. I am so proud to have been part of the movement and I’m sure the next 70 years will be just as inspiring and impactful”.