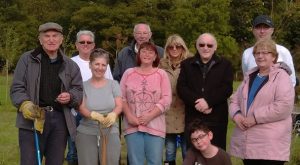 South West Essex & Settlement Reform Synagogue, who joined other Reform synagogues at a mass daffodil planting in the Woodland Cemetery in Cheshunt. The bulb planting was organised by the Joint Jewish Burial Society with the aim of planting 10,000 daffodils this autumn.

When the Woodland Cemetery was first opened in 2011 synagogue members joined forces to plant hundreds of saplings which are slowly maturing. The site has room for around 10,000 burials and serves the Reform, Liberal and Masorti congregations in a greener, more environmentally friendly way where traditional headstones are replaced by small biodegradable memorial plaques.