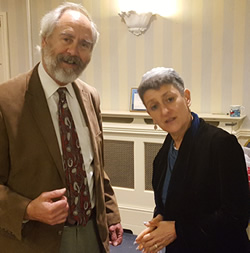 Reform Judaism has launched a campaign of outreach which has just started in Cardiff and will make its way around the UK.

Two of its leading exponents, Rabbi Laura Janner-Klausner and Rabbi Dr Jonathan Romain, are travelling around major cities to both enthuse existing congregations and reach out to individuals who are unaffiliated.

Their joint talk is entitled Nine reasons for being Reform and one for not and deals with areas where it is felt that Reform Judaism has a powerful message, such as a prayer book that is intelligible and meaningful, communities where women are fully equal, a welcoming attitude to mixed-faith couples and abolition of unethical Jewish practices (such as having the categories of a mamzer or agunah).

It also includes bringing in processes within our rabbinic court to enable giving Jewish status to children with one Jewish parent, whether it be their mother or father, if they have a Jewish identity and upbringing. This can apply to adults too.

According to Rabbi Janner-Klausner: “We don’t expect people to travel to us, but we are happy to go to wherever they are. Future stops include Leeds, Newcastle, Cambridge and Hatch End, with more to follow”.

Rabbi Romain explained that “One of the best kept secrets is the inclusive approach that Reform Judaism has to modern questions – from status issues to cycle of life ceremonies – combining tradition with common-sense, and it is time we shouted it out aloud from the rooftops”.

The Cardiff event was attended by over 50 people and included questions from the floor about Israel, divorce, children’s identity, God and welcoming Jews who feel marginalised.