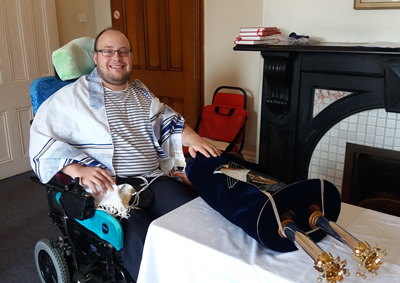 Reform Judaism is committed to welcoming potential converts to Judaism with compassion and inclusivity, combining modernity with Jewish tradition. In this spirit, Reform Judaism’s Beit Din, or religious court, which oversees issues of Jewish status including conversion, recently held a small number of courts via Skype for the first time.

Christopher Parker, who is 27 and comes from Chesterfield in Derbyshire has cerebral palsy. Appearing before the court to complete the process of his conversion to Judaism was challenging as Rabbi Dr Jackie Tabick, Convenor of the Reform Beit Din explains: “We first met Christopher a few years ago at our residential Beit Din weekend for people considering conversion to Judaism, currently in the process of conversion or who have recently converted. It was obvious that his commitment to convert was strongly held, but the practicalities of how to achieve this were complicated. Christopher was part of a small Jewish community – Sheffield and District Reform Jewish Congregation – where he could access services, but without a rabbi or conversion classes. Thankfully West London Synagogue, under the guidance of Rabbi Sybil Sheridan, were happy to add him to their Skype lessons, and Rabbi Esther Hugenholtz was willing to sponsor him.

“Reform Judaism is committed to doing all we can to ensure that our conversion process is compassionate and as inclusive as possible. Until our mikveh is refurbished, there is unfortunately no access for disabled people, so at the end of the course we arranged for a Skype Beit Din appearance for Christopher, which he passed with flying colours. Rabbi Hugenholtz then arranged for tevilah, ritual emersion, at a local health club. So mazal tov Chris and we look forward to seeing you at other Reform Judaism events”.

Christopher said: “This has been a great experience, which has entailed a lot of commitment and hard work, as well as allowing me to meet a lot of great people. I am so thankful to all of the rabbis who supported me through this process, have taught me so much and have helped me achieve a major goal of mine”.

Other cases have included a woman from Italy and a man in Scotland who were each unable to travel due to limited mobility or poor health.