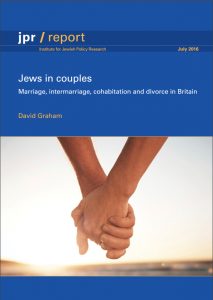 A new report on intermarriage in Britain from JPR, the Institute for Jewish Policy Research has been released. It estimates that the intermarriage rate in Britain currently stands at 26%, which is dramatically lower than the equivalent figure of 58% for the United States. Moreover, it shows that the rate has only climbed very slowly in Britain since the early 1980s, when it stood at 23%.

Rabbi Dr Jonathan Romain of Maidenhead Synagogue, who has worked with mixed-faith couples nationally for over 25 years:

“What is just as significant as the figures is the enormous change in communal attitudes to intermarried Jews in recent decades: rabbis rarely slam the phone down on them and parents no longer sit shivah. Instead families try to integrate the non-Jewish partner, while many synagogues offer Introduction to Judaism courses to make them feel at home. We have realised that Jews who marry a non-Jew can still feel very Jewish and want to maintain their heritage. We have also learnt that we are as powerless as Canute to stem the tide, but we can help keep the couple within the Jewish orbit and encourage them to pass on Judaism to the next generation. As the report indicates, it may not always succeed, but is has a much better chance than slamming the door in their face. Every Jewish generation worries it will be the last one, and so far they have all been proved wrong”.

“This is a moment for celebration as our concerns have not come to fruition. We have ensured that people of all backgrounds can flourish in our communities thanks to our inclusive attitudes. And now our challenge is to continue to inspire Jewish life with flourishing synagogues and homes”.