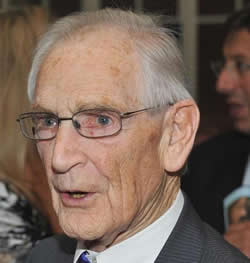 Reform Judaism mourns Jeffery Rose z”l, who has died. He was 93. Jeffery’s contribution to Reform Judaism, together with his late wife, Joyce z”l, was remarkable. He chaired RSGB (now Reform Judaism), Alyth, the European Region of the World Union for Progressive Judaism (now EUPJ), Leo Baeck College and the Reform Foundation Trust.

He served as Treasurer of the College and of the Centre for Jewish Education. He held many of the other major lay posts in each of these organisations. He was a regular leader of services and Torah reader at Alyth and conducted Pesach sedarim at Jewish Care homes. He organised RSGB’s jubilee celebrations and was instrumental in creating the first RSGB Education Department.

Our condolences go to his children, Simon and Sunday, and all in our community who mourn his death. May his memory be a blessing.