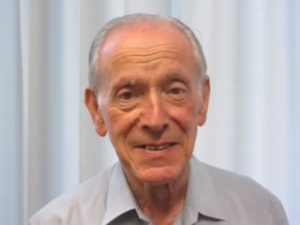 Reform Judaism mourns Raymond Goldman who has died in Israel. He was 87.

Raymond was instrumental in the leadership and development of the RSGB – Reform Synagogues of Great Britain which later became The Movement for Reform Judaism.

Raymond was connected with Alyth since his parents became members in 1935 when he entered the religion school. He taught at the school, chaired the Alyth Jewish Fellowship and was a warden. From 1964-1966 he served as the community’s Vice-Chair and as Chair from 1997-2000.

Heavily involved in the development of a Reform youth movement, Raymond was elected to chair the YASGB (the Youth Association of the Synagogues of Great Britain, forerunner of today’s RSY-Netzer) in 1950 and it was here he met his future wife Joy. He represented the YASGB and Alyth on the RSGB Council.

Many newly established congregations welcomed Raymond to conduct their services but it was to Finchley Reform Synagogue that he gave much of his time at the community’s establishment in 1960. In the late 1960s he was a key member of the YASGB Commission chaired by his dear friend Neville Sassienie which produced Towards the Seventies, the report of the commission, a key recommendation of which was the creation of the position of Youth Development Officer.

In 1966, he relinquished a directorship in a family business to accept RSGB’s first professional position that of its General Secretary, and in 1979 became its first Executive Director based initially at West London Synagogue, then for a short time in Swiss Cottage, and finally at the Sternberg Centre in Finchley, taking a key role in these moves and the establishment of the Centre. On taking up his post he stated that his ambition was “to make RSGB articulate to its own membership and to build a movement of committed Jews” and to see it “playing the full and influential role which was its right in Anglo-Jewry”.

For three decades he worked tirelessly in a variety of areas and administered the RSGB’s transition to being a major component of British Jewish life, providing a constant presence internally and promoting its message externally. An important ingredient in Raymond’s success was the ability to work with the hundreds of different council members and synagogue representatives with whom he had contact. Equally impressive was the patience and tact he displayed throughout the thousands of hours of committee meetings he attended.

Raymond retired in 1995. He and his wife made aliyah, moving to Israel four and half years ago to be close to his family, firstly to Rehovot and more recently to a retirement home in Protea Ba’har near to Jerusalem.

He is survived by his wife Joy, daughters Karen and Deborah and three grandchildren.

May his memory be a blessing.

Rabbi Laura Janner-Klausner, Senior Rabbi to Reform Judaism said: “Raymond set the bar very high with his drive for excellence, learning and achievements. As well as his outstanding professionalism, his unique deep voice resounded through our conferences and services bringing a depth of knowledge and wisdom to our Movement”.

Rabbi Professor Tony Bayfield CBE said:  “Raymond built the RSGB from nothing into a highly efficient and professional organisation supporting some 40 growing congregations throughout the UK. In an age of religious decline, he was midwife to a burgeoning expression of living Judaism and Jewish living. We worked together for many years and, on retirement, Raymond not only welcomed me into office by handing on a Torah scroll at the Induction Ceremony but supported and encouraged me in the next step of building a major religious Movement on the foundations he had laid. Raymond never received the recognition he so richly deserved but more than 20 years ago told me he never expected more than a polite round of applause at Conference! He deserves so much more”.

David Jacobs, who served as Director for Synagogue Partnership for the Movement for Reform Judaism and was a lifelong family friend and long-standing colleague said: “This marks the passing of a generation and the end of an era. Raymond served the RSGB and the wider Jewish community with great distinction and an absolute dedication. He was the consummate Jewish civil servant with a passion for the development of Reform Judaism”.