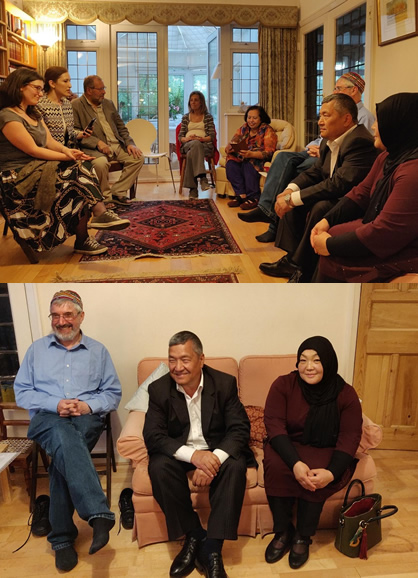 Progressive rabbis expressed solidarity with persecuted Uyghur Muslims in China’s Xinjiang region by holding a fast on Monday 3 June. The fast, led by Rabbis Alexandra Wright and Michael Hilton followed a René Cassin public meeting to raise awareness on the Uyghur crisis and how the Jewish community should respond.

Approaching the end of Ramadan, the fast provided a symbolic identification with the Uyghur Muslims, who are not allowed to fast or practice any part of their religion. The rabbis broke their fast together at an iftar at the home of Rabbi Alexandra Wright with Quran study and a meeting with five Uyghurs to learn more about their plight.

Rabbi Michael Hilton said: “It was an honour and a privilege as a Jew to fast on the last day of Ramadan, to highlight the plight of the Uyghur Muslims who are not allowed to practise their faith and to meet five Uyghurs who have been through so much and yet retain their humanity”.

Visit the René Cassin website to find out more about the persecution of Uyghur Muslims and how you can take action.

Share This
Categories
Recent Posts
If you have any questions or queries, please don't hesitate to contact us. You can find full details for each of our departments on our contact page...
Get In Touch
Copyright © 2019 The Movement for Reform Judaism - All Rights Reserved
Company Registration Number: 07431950, Charity Number: 1139806
Affiliated with the World Union for Progressive Judaism &
the European Union for Progressive Judaism
Web Design by Friendly Gorilla
This website uses cookies to improve your experience. We'll assume you're ok with this, but you can opt-out if you wish.Accept Read More
Privacy & Cookies Policy