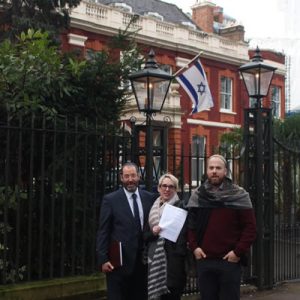 Rabbis Josh Levy (Reform), Charley Baginsky (Liberal) and Oliver Joseph (Masorti) represented hundreds of colleagues from around the world at the meeting, handing Deputy Ambassador Sharon Bar-Li a global letter signed by 750 rabbis from across all Jewish denominations.

The group told the Deputy Ambassador that the rare, but unambiguous, cohesion between the different Jewish movements and rabbinates on this specific issue showed how important it was.

They stressed that although Israel is a secular state, it was founded on Jewish values and the Israeli Government’s shift in policy – to now force African asylum seekers to choose between deportation to Rwanda and indefinite imprisonment – is abhorrent to those values.

The rabbis explained that we are all B’tselem Elohim, created in the image of God, and also objected to some of the language being used to stigmatise refugees – especially as Jewish people have spent centuries as refugees ourselves.

The Deputy Ambassador praised the Diaspora Zionist Jewish community in the UK and promised that the strong message she received would be conveyed to the appropriate people in the Israeli Government.

However, she also added that the Government’s position is that these are illegal immigrants, who are being provided with a solution that will enable them to find a new start and to re-establish themselves in a third country that is welcoming and safe, along with significant funds with which to support this.

New Israel Fund CEO Adam Ognall said: “What struck me most was that the rabbis who signed the letter have not always seen eye to eye with each other in regards to Israeli politics. Many have also previously felt uncomfortable about publicly criticising the Israeli Government and its policy positions.

“Yet, in this case, all felt a prevailing sense of religious and moral responsibility to unite and call Israel’s Government out on this issue. They made it very clear that forced deportations are incompatible with their religious values.”

Rabbi Charley Baginsky – who is the spokesperson for the Alliance for Progressive Judaism and represents the joint movement sponsored Israel desk – added: “On this issue, our movements really did speak with one unified voice. We also made clear that we hold the Israeli Government to the same standard as the British Government, and pointed out how our Jewish communities are strongly involved in the work of settling refugees here in the UK because it aligns with our Jewish values and our own story.”

Rabbi Janner-Klausner, Senior Rabbi to Reform Judaism said: “Ensuring the safety of refugees is an inherently Jewish value. On reaching Israel, asylum seekers should be met with compassion and fairness, and not with an impossible ultimatum.”