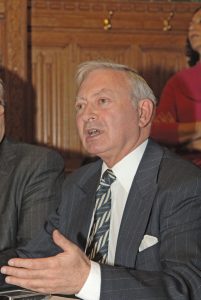 Rabbi Maurice Michaels of Bournemouth Reform Synagogue was re-elected Hon. Treasurer of the Interfaith Network for the UK at its recent AGM.  Rabbi Michaels has been involved in interfaith work for many decades and has been at the forefront of local initiatives in all the areas that he has served as Rabbi.  He commented, “Unlike the other Trustees, who are nominated to the AGM by the organisations or faith groups they represent, the Hon. Treasurer is elected ad personam and so I am grateful to the outgoing Board of Trustees and the AGM delegates for showing renewed confidence in me.  The Interfaith Network serves nearly 200 groups around the country and ultimately it is not Policy White Paper or Government Programmes, but interfaith work at grassroots level that will enable the people of this country to co-exist peacefully and harmoniously.”