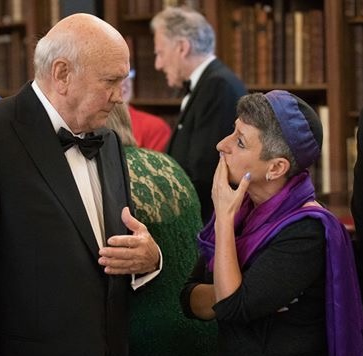 Last night, the former President of South Africa, F. W. de Klerk spoke at the 75th dinner anniversary of the Council of Christians and Jews. In 1990 he’d released Nelson Mandela from prison after which the two men worked together to end Apartheid. Their capacity to cooperate with someone with whom they had previously disagreed changed history.

The American psychologist, Jonathan Haidt observes that when we strongly disagree with a point of view our reaction can be physical – a moral disgust, inhibiting sensible thought. I believe that expressions of moral disgust, of unfettered anger are increasing and are threatening Britain’s culture of healthy debate.

In healthy debate, we may change our minds – and that is hard. It can be risky and frightening. But if we don’t take the risk of candid conversations, we may become a more frightened, less creative, less fun, less funny society. If we can’t try out ideas without fear – whether in person or in virtual spaces – we leave the healthy spaces of dinner time discussions and instead enter the world of the Coliseum – where one click of the computer mouse can send us straight into the lion’s mouth.

We have to be able to debate issues such as immigration without facing accusations of being a reactionary racist or a naive snowflake. We must be able to discuss Israel-Palestine, Islamophobia or anti-Semitism without being threatened. These topics cannot be Sacred Cows.

In ancient Judaism one of the ways of responding to things that were difficult or that provoked feelings of fear and dis-gust was to offer a sacrifice to God at the Jerusalem Tem-ple. The Hebrew for sacrifice is “korban” which means “bringing near”. By going towards the difficulty by acknowl-edging it rather than running away from it, Jews used a rit-ual process that enabled them to react to difficulty, absorb it and resolve it. This was a path to return to others and to a new normality after the challenging experience.

And still today rituals can push us away from reflex actions and I instinctive reactions and towards reflective thought. They can channel our fear, anger or disgust to enable us to reconsider. They can re-calibrate us when we are out of balance.

Last night was an excellent example of how even something as simple as the ritual of blessing and breaking bread together can establish positive common ground between two sibling religions. The success of the Council of Christians and Jews to enable difficult dialogue against the background of one of the longest, most visceral and violent hatreds in history – is certainly a moment for celebration.