Rabbi Laura Janner-Klausner addressed a crowd of 10,000 people in Trafalgar Square organised by Solidarity with Refugees on the eve of a UN summit for refugees and migrants hosted by Barack Obama in New York. 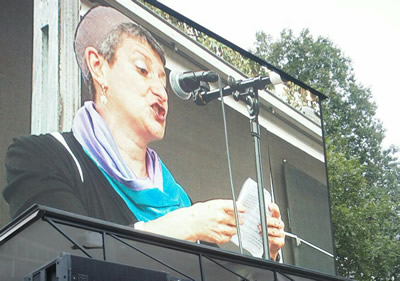 Britain has a proud history of welcoming refugees.

On behalf of the Jewish community, I’m so grateful that Britain rescued thousands of Jewish refugees in the mid twentieth century.
Let’s look at even one example. Ludwig Guttmann, who came here in March 1939 as a refugee from Germany.

His legacy to Britain is being played out in Rio at this very moment.
Guttmann, a spinal cord injury specialist, encouraged his patients, many of whom were injured in war, to participate in sport. It was his vision of international games for disabled people the equivalent of the Olympic Games that became the paraplegic games. This refugee, fleeing for his life founded the Paralympic Games.
Our current Paralympians in Rio have done him proud.

Guttman was a testament to the gifts that refugees can bring. His talents were a credit to Britain and beyond. He was knighted in 1966.

This is just one example.

What talents are being squandered out there in Calais, Greece, Turkey, in the Mediterranean Sea, in Jordan and in Syria itself?

But even this inspirational example might be missing the core, vital and moral point. We’re not here today because of what refugees can offer to us, nor are we here only to celebrate the talents they might bring. We don’t say ‘Refugees Welcome’ to celebrate the benefits we enjoy from living in a culturally diverse country.

We must do more.

Sir Ludwig Guttmann and his family were given a chance to live and to live with dignity. British Paralympians have thrived because of his work and his inspiration. He thrived here and enabled others to do so too – especially this weekend in Rio. That is his legacy. We must make it ours too.