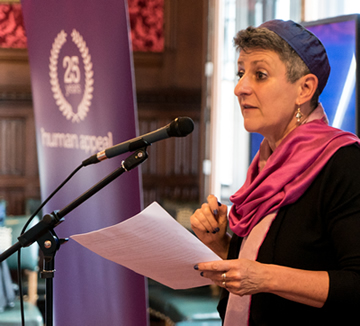 Human Appeal are the fastest growing Muslim-faith based charity in the UK who specialise in humanitarian aid, international development as well as helping people in the UK, such as rough sleepers. They held the event to mark the Islamic festival with hate crime and the ongoing situation facing the Rohingya in Myanmar, where Human Appeal work. Human Appeal held the event in association with Reform Judaism, City Sikhs and The Muslim News.

Speaking at the event, Rabbi Janner-Klausner spoke powerfully, celebrating the contribution made by British Muslims, noting how closely linked the Muslim and Jewish communities are and denouncing all hate crime: “We have to avoid disagreement [between members of the Muslim and Jewish communities] turning to hate, because hate is poison…. For years the government has taken hate crime against Jews seriously. And this year we had an endorsed definition of anti-Semitism from the government with accompanying guidelines and budget lines. What we need to do is demand a parallel system for our Muslim brothers and sisters.”

.@LauraJanklaus calls for legal protection for the Muslim community pic.twitter.com/hq6oHtfj5D

Conservative MP Anna Soubry, Labour’s Secretary of State for Exiting the European Union Sir Keir Starmer and Human Appeal Chief Executive and a leading voice of the British Muslim community Othman Moqbel also spoke at the event drawing particular attention to the plight of the Rohingya in Myanmar.

Anna Soubry said: “I just also want to say that [the situation in Myanmar] facing the Rohingya is a genocide, and this country [the United Kingdom] in particular has a responsibility to the Rohingya. Because if you look at their history, it is tied up with our history as the old British Empire.”

Sir Keir Starmer:  “I have heard some of the stories they [The Rohingya] carry with them, about what happened in their villages and in their homes, to their communities, to their families and the things that have happened to them on their journey.

And I want to say these are appalling attacks on Rohingya Muslims and they deserve to be widely condemned. All concerned, all concerned, should be held to account to these atrocities. We should stand together, all communities, in response to what’s going on.”

Human Appeal Chief Executive Othman Moqbel also expressed his concerns that if the suffering of the Myanmar continues that it will aid extremists. He said “I fear, their suffering will not only destroy more lives but also be used to spread further division and hatred.”

Outside of international work, Human Appeal received widespread coverage for their Muslims for Manchester campaign in May, which saw them raise over £28,000 for the victims of the Manchester Arena attack. Human Appeal raised over £170,000 for UK people in need, such as rough sleepers or victims of the Grenfell Tower fire, during the Islamic holy month of Ramadan alone, this year.