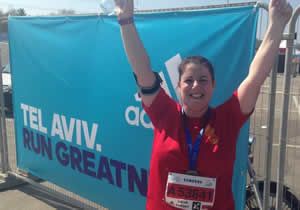 Radlett Reform Synagogue’s Associate Rabbi and Director of Youth Rabbi Celia Surget is training to run the Paris marathon on 9 April to support and honour the work of Leo Baeck College (LBC) on its 60th anniversary. She is aiming to raise £60,000.

Spending her time between Radlett and LBC, Rabbi Celia tutors both both British and French students, runs Radlett’s busy Cheder and serves as the treasurer of the newly constituted ERA (the European Progressive Rabbinic association).

“It is my belief that Leo Baeck offers the best and strongest education to rabbinic students on this continent, and that is why I have chosen to raise money for it. Despite having paid personally well over £20000 for my own studies,” says Rabbi Celia.

“I firmly believe that as a graduate, I have a responsibility to ensure that my alma mater is still able to fulfil its commitment to providing excellent training and allowing the Progressive rabbinate worldwide to be the best it can be.

“In addition, recent events in the UK and perhaps more specifically in the US have opened my eyes to the role that we, Progressive clergy, can play in providing pastoral support to those who are struggling with a rapidly changing world, raising our voices because of the privileged positions we find ourselves in where people will listen to us, and upholding values of openness and inclusivity that are so unique to our movement”.

Rabbi Celia studied history of religions, Hebrew and philosophy at the University of Geneva and began her rabbinic studies at Hebrew Union College, before transferring to Leo Baeck College. Her journey through Leo Baeck was rather atypical, she was a full, independent, fee-paying student, and did not receive any bursary of any kind. Her placements included both Liberal and Reform congregations. On graduating, she spent four years working for the MJLF Mouvement Juif Liberal de France in Paris.