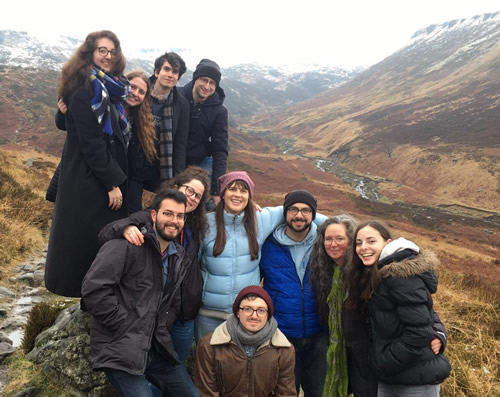 Reform Judaism and Liberal Judaism jointly hosted the first ever Progressively-led Jewish retreat for students as part of a new Alliance for Progressive Judaism initiative.

Since the turn of the year, the Reform and Liberal student chaplains, Rabbis Daniel Lichman and Leah Jordan, have teamed up for a united effort on campuses around the UK – allowing them to reach more people than ever before.

The co-chaplains are also working alongside Maya Skaarbrevik, who is the fieldworker for Reform Judaism’s Jeneration initiative for students and LJY-Netzer’s movement worker with responsibility for students, Ellie Lawson.

Together they put on Reconnect: A Retreat for Jewish Students held in the Peak District. The retreat was designed to give participants the chance to come together and reconnect to the parts of themselves that may have become lost or forgotten over the course of the academic year.

Students from nine different universities attended, from former Progressive youth movement leaders to those who had never been involved with Jewish activity until university.

The three pillars of the weekend saw the participants: connect to their Judaism through prayer, learning and discussion; connect to themselves through hiking, friendship and self-reflection; and connect to their community through song sessions and training workshops.

The training, covering community organising and leadership development, was delivered by Charlotte Fischer and Tamara Joseph of Citizens UK.

Maya Skaarbrevik said: “This weekend took on the challenge of helping young Progressively minded students transcend their daily lives and reconnect to their Judaism and themselves through community, learning and empowerment. It succeeded beyond measure.

“What this shows is how incredibly important it is for both movements to work together to connect with our young people and give them the skills and support to flourish on their campuses and in their Jewish identities.”

Rabbi Leah Jordan added: “This retreat showed that the power of Liberal and Reform Judaism working together for students is much greater than the sum of our parts.”