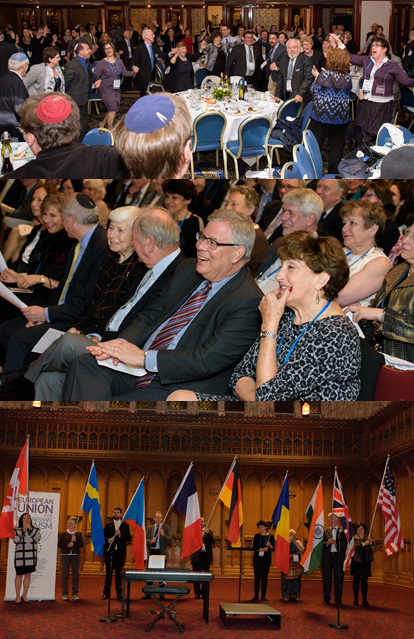 Resolutions calling for a comprehensive humanitarian response to Europe’s refugee crisis and an immediate implementation of the Israeli Government’s decision in relation to the Kotel were two highlights of the Biennial Conference of the European Union for Progressive Judaism (EUPJ).

Held in London from 14-17 April, the conference was attended by more than 350 people from 29 countries, including 86 rabbis and student rabbis.

Landmarks included the formation of a European Progressive Rabbinic Assembly to provide support, training and networking for rabbis across the continent, and the admission of three new members – the newly formed French Assembly of Liberal Jews and the EUPJ’s first communities in Madrid and Portugal.

The conference began with an opening ceremony at London’s Guildhall, and included services at West London Synagogue (WLS) and The Liberal Jewish Synagogue, as well as a visit to the mosque at the Muslim Cultural Heritage Centre and a communal Friday night dinner.

During the Kabbalat Shabbat at WLS on Friday, a Sefer Torah was given by the synagogue to the new Reform Jewish Community of Madrid in a very moving service – which ended with 70 rabbis on the Bimah singing Adon Olam and chanting the priestly blessing.

The theme of the EUPJ Biennial was ‘Building Bridges’, both within and outside the Jewish world, with discussions on strengthening communal relationships at a time when Europe is facing a rise in extremism, isolationism and terrorism.

The keynote address was by Israeli historian and writer Fania Oz-Salzberger, on the topic ‘Jewish Identity – What Unites and Divides Us as Jews?’

She said: “By 2050, over half of world Jewry will be Haredim and it’s for us to be the other Judaism, to claim that alternative, enriching, space. We are that bold, loving, joy-filled, skill filled Judaism of equality and integrity.

“Our inclusive and innovative formula for Jewish life is a magnet for young families, mixed couples and previously unaffiliated Jews. We can and must sustain our vision. We need to show off. We need to show who we are and why we love our Progressive Judaism using that famous Jewish skill – chutzpah.”

Describing himself as a “politically committed European”, albeit one unimpressed by the “unholy alliance of David Cameron and Jeremy Corbyn” in the upcoming EU referendum, Rabbi Rich told of his history as a descendant of immigrants.

He said: “These details of my family’s history gives immense pride to me because, not only do they demonstrate an immigrant family’s commitment to Britain – for them a new homeland – but they give personal testimony against the nonsense of a petty nationalism which is a depressing feature of the discourse in this and other countries in the opening decades of the 21st century.”

He added: “Now, more than ever, each of us holds multiple identities: English, British, European, Jewish, Liberal Jewish and so on and, if Progressive Judaism in Europe is to have a bold future, it will need to accommodate itself to an even more complex array of identities which will make up the modern European Jew.”

The EUPJ is one of the seven regions of the World Union for Progressive Judaism (WUPJ), which is now the largest synagogal body in the world with more than 1.7 million members across 50 countries.

EUPJ chair Miriam Kramer said: “The 2016 Biennial Conference exceeded all expectations. The services, for Kabbalat Shabbat at West London Synagogue and Shabbat morning at The Liberal Jewish Synagogue, were inspiring.

“The workshops and plenary sessions were full to bursting – both in terms of people attending and in exchange of ideas and information – and we were honoured to be able to celebrate two significant anniversaries.”