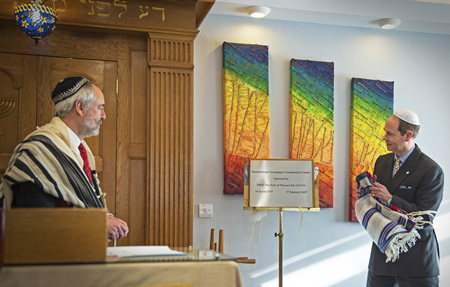 Prince Edward was guest of honour at the ceremony to open Maidenhead’s Synagogue‘s new building on Tuesday 17 January.

Click here to watch an ITV News report on the opening

The new building was needed to accommodate both the growth in membership and the extensive activities, from Poetry Circle to Krav Maga group, as well as Film Club and Ethical Challenges debates.

The Prince was greeted by Rabbi Dr Jonathan Romain who took him on a tour of various groups that operate within the building, ranging from members of the Ganon/playgroup to those who cater for the Friendship Club.

Much of the growth has been due to the fact that the Synagogue has re-positioned itself from being a prayer hall to being a community centre, attracting many who are not believers and do not attend services, but who still enjoy participating in social and cultural life.

The result is that Maidenhead has become the largest non-metropolitan synagogue in the country, with young Jews families moving into the area. Although it is situated in Maidenhead, its membership covers the surrounding towns in Berkshire and Buckinghamshire, totally 820 households.

Among the guests were Geoffrey Marx, Reform Judaism Chair, as well as representatives of local Christian, Muslim and Sikh groups.