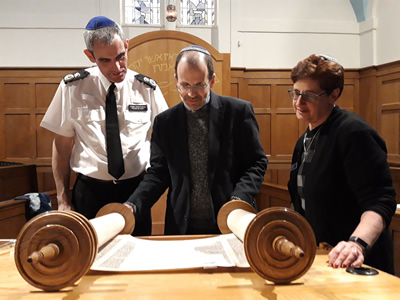 Charlie Hall, Chief Constable of Hertfordshire was guest of honour at a special chavurah supper at Radlett Reform Synagogue. Accompanying him were Clare Smith, Chief Inspector of Hertsmere and other senior uniform and CID officers. The occasion marked the recent appointment of Special Constables from Radlett Reform, and Borehamwood and Edgware United Synagogues, who were all present.

Radlett Reform Synagogue’s Senior Rabbi, Paul Freedman and Synagogue Chair Irene Blaston showed a Torah scroll to the Chief Constable, including an explanation about the Czech scrolls rescued after the Second World War, of which the synagogue holds two. Chief Constable Hall praised the Jewish community for its commitment to local policing.

Rabbi Freedman said “the evening was a great opportunity to continue to build upon already good relations with the local police and to thank them for all they do”.