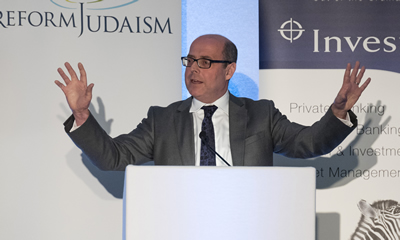 Mr Robinson applauded the work of Reform Judaism, noting his encounters in the Today Programme studio with Senior Rabbi, Laura Janner-Klausner. He also praised the Movement’s engagement with young people with mental health problems, support for older people and outreach to Muslim communities as “the best answer for people who want to know what it means to be Jewish”.

Paying tribute to his German refugee grandparents, Robinson noted that his Jewish heritage is something that is becoming more important to him as he grows older. Discussing anti-Semitism and the rise of extremism, he urged his audience to “always fight for the truth” and to respond to extremism with a “full range of emotions” including humour and empathy.

Referring to a recent report by the Community Security Trust and Jewish Policy Research, the BBC’s former Political Editor noted that Britain is “one of the least anti-Semitic countries in the world” and that we must recognise that “hatred, anger and fear affects many, many people beyond the Jewish community… we must ask ourselves what we can do to reach out to others – as Reform Judaism does”.

Click here to read a transcript of his speech in full.

This message of partnership was underlined by Jennifer Jankel of North West Surrey Synagogue in her appeal: “I cannot possibly imagine how we would live open, generous and meaningful lives without Reform Judaism… Reform Judaism sustains, strengthens and is successful”.