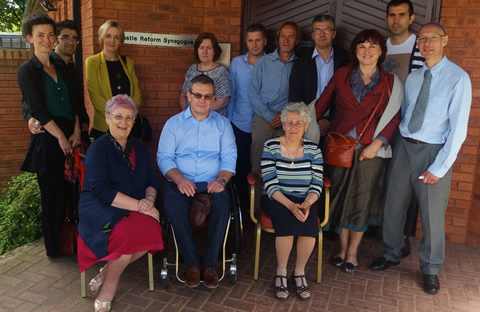 Described by Kofi Annan, then Secretary –General of the United Nations in 2005, as “the worst crime on European soil since the Second World War”, the massacre of more than 8,000 Bosnian Muslims on 11 July 1995 remains a vivid memory for the Bosnian community in Newcastle.

Newcastle Reform Synagogue hosted a memorial service on the nearest Shabbat to the disaster, 8 July, inviting members of Bosnian community to attend and, indeed to participate as Brenda Dinsdale explains.

Smajo Beso contacted the synagogue, detailing the history of mutual respect, understanding, support and togetherness which had been an intrinsic part of Bosnian and Jewish history. Ruth Heyman, Education Officer for the synagogue led the service, supported by Warden,Benny Ross, which included special prayers written for the Bosnian community. Hakija Stitkovac addressed the congregation, stressing that Jews and Bosnians share a true understanding of the real meanings of persecution and the resulting and long lasting traumas of the aftermath.

A moving account of how Kada Hotić lost her son, husband and brother in Srebrenica was read by Irena Mujacic Carlton. Kada and thousands of other women joined together to form the Mothers of Srebrencia Association because they had no knowledge of what had happened to their loved ones. Kada herself had been separated from her male relatives and, after calling her son Samer back to say goodbye as they were walking towards the UN base and possible safety, she never saw him again.

People in the congregation were visibly moved by Irena’s words. She had warned that some of the descriptions of events were graphic, and as the story unfolded and we heard of women being raped and children murdered, we could not help but see parallels between the events of 1992 and the atrocities of the Nazi regime.

Thanking the community, Irena said: “I felt today that the suffering which happened in Srebrenica was deeply understood in this small community in the North East of England. That is so humbling and I hope that in times to come we will be able to continue developing and nurturing this relationship”.

During the Kiddush which followed the service, the two communities were able to mingle, share experiences and establish links for the future.