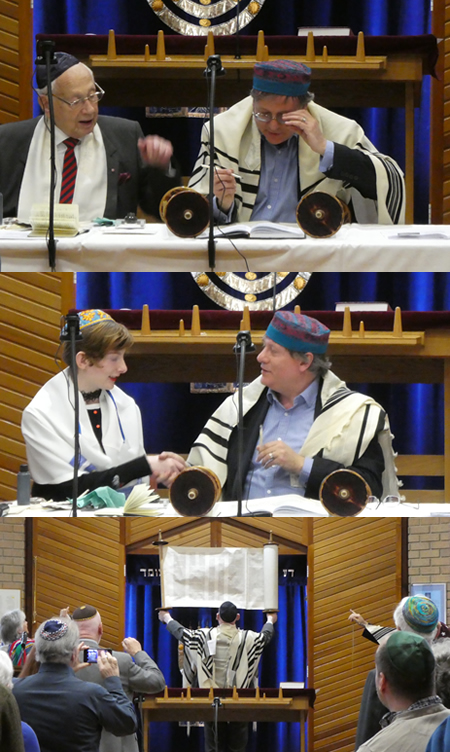 Newcastle Reform Synagogue members experienced an emotional siyyum – the ceremony marking the completion of repairs to their Torah scroll – on 28 April, as Brenda Dinsdale explains.

Sofer (scribe) Marc Michaels travelled up to Newcastle from London arriving to a crowded shul. In her welcome, Chair, Linda Scott, noted that the synagogue itself had been opened by Marc’s father, Rabbi Maurice Michaels.

Invited guests included Jeffrey Ohrenstein, Chair of the Memorial Scrolls Trust, Marie van der Zyl, Chair of the Board of Deputies of British Jews and clergy from various faiths.

Ten members of the synagogue were honoured with an invitation to ‘complete’ a letter, or rather, to touch Marc’s arm as he wrote on the parchment.

George Loble, founder of the synagogue and Honorary Life President and Keira Edwards, (pictured) represented the age demographic of the community.

Throughout the final lettering, Marc described the way in which soferim work and how important it is to retain the essence of the original writing.

Members of the synagogue had created a wonderful display of the history of the scroll, which had been rescued after the war and there was a display provide by the Memorial Scrolls Trust. Originally from Pardubice in the Czech Republic, the scroll has been an important part of Newcastle Reform Synagogue and everyone is delighted it has been restored.

Members commented: “A unique event”, “I don’t expect to see this again in my lifetime”, “Now the scroll has been restored, I feel we’re honouring Pardubice” and “I felt very emotional as I watched Marc writing… I was close to tears”.