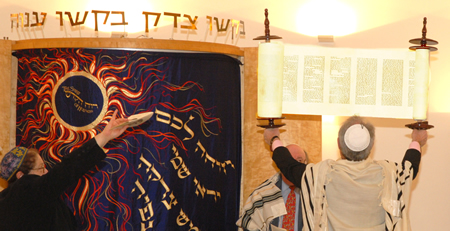 South West Essex and Settlement Reform Synagogue (SWESRS) held a ceremony for completion of their new Torah scroll, a siyum.

This is the first new scroll the synagogue has had.

Some of the people present were overcome, saying they felt visibly moved seeing the completion. Others that this was a once in a life time experience to ‘write’ one of the last letters.

After an address by the synagogue chairman the scroll was brought into the synagogue hall under a chuppah canopy and placed with the other Torah scrolls.

The new scroll was paraded around the hall before being lifted and read for the first time.