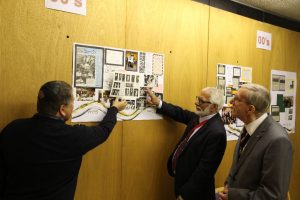 Over 100 members, past and present, joined forces to celebrate the 60th anniversary of Mosaic Reform, formerly Middlesex New Synagogue.

Photos of events over the years, including rabbis, weddings and founders, lined the walls of the synagogue in Bessborough Road on October 20th. Among the guests were long-standing synagogue supporters Alderman Keith Toms and Harrow’s deputy mayor Cllr Ghazanfar (cor) Ali.

Alex Gerlis interviewed Ann Simon, whose father was founder chairman. She has worked as secretary and administrator at the synagogue for over 30 years and with six rabbis.

She spoke of Mosaic’s history, from a small group from West London Synagogue, first meeting in a Wembley church hall, then moving to the then girls’ school based on our current site, as well as the future plans to move to new premises.

She said: “When the community started it was more important to have a rabbi than premises, a very brave decision. I don’t really know why we came here. It was never really a Jewish area.”

She also spoke of the characters who stood out, like rabbi Lionel Blue, who was so “looked after” by the women, they even ironed his shirts and how he treated her to her first ice-cream soda on her birthday.

She said: “He was so amazing for the community, his impact far outweighed the short time he was with us, only three years.”

She spoke of a community who had “given unstintingly of their time. This community, from day one, has been blessed by its volunteers and by a group of people who set up this community off the beaten track. It needed real visionaries.

“We have been lucky to have the leaders of today who have built on the leaders of yesterday. This community will go from strength to strength because we have the people who will make it work. This is a people place.”

Mosaic Reform’s rabbi Kathleen de Magtige-Middleton praised the “faith and dedication of founder members, achievements of our rabbis and hard work” of everyone involved over the past 60 years.

She said: “This community was always more than a group of friends from West London.”

Speaking about plans to move to new premises, she added: “ We are a community that is not afraid to change and adapt to the needs of the moment.”

Mosaic Reform chairman Lawrence Chadwick thanked everyone involved for their hard work and Cllr Ali said how delighted he was to be involved with Mosaic and praised the local community for its inter-faith work.

He said: We should all live in peace and harmony help each other. I pray Harrow will become a beacon to other boroughs and countries.”

There was also, of course, plenty of food as well as entertainment from resident musicians and members, the Plonkers and a hilarious performance from Howard Berger, a wonderful sketch from Harry Grant and Michael Barnett and songs from the religion school.

Thanks must go to Jane Prentice and her fantastic team for an incredible spread, which even included a retro table and Benje Noble as master of ceremonies.

Mosaic Reform
Share This
Email our media team
Categories
Recent Posts
If you have any questions or queries, please don't hesitate to contact us. You can find full details for each of our departments on our contact page...
Get In Touch
Copyright © 2019 The Movement for Reform Judaism - All Rights Reserved
Company Registration Number: 07431950, Charity Number: 1139806
Affiliated with the World Union for Progressive Judaism &
the European Union for Progressive Judaism
Web Design by Friendly Gorilla
This website uses cookies to improve your experience. We'll assume you're ok with this, but you can opt-out if you wish.Accept Read More
Privacy & Cookies Policy