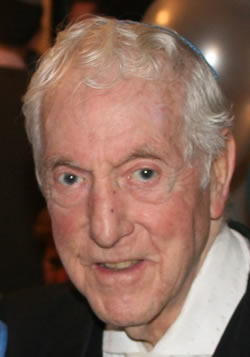 Reform Judaism mourns Mitch Wax, past President of Edgware and District Reform Synagogue who sadly died on 13 March. He was 85. Sidney Budd pays tribute to him here, noting his remarkable contribution to the life of the community.

Mitch was known to many people in a variety of guises, as a teacher, a master craftsman, a showman and songwriter, an artist, a long-standing leader in one of the largest synagogues in Europe, and above all, a lifelong volunteer. How could just one person fill all those roles and more?

Born in 1930, son of Davis and Hilda Wax, he grew up in Edgware where his large family were members of the local United Synagogue. His parents were originally emigrants from the Tsarist Empire, and had met and married in London where Davis worked as a tailor. Although Mitch enjoyed study, he left school at 14 to work in his father’s growing tailoring business, where he learned to become a master cutter. At 17, a few days after the declaration of the State of Israel, Mitch and two friends went out there hoping to help, but as he was under 18 and still a minor he had to return. Nevertheless, his love for Israel remained constant for the rest of his life.

Mitch was multi-talented, and this in conjunction with his warm personality led him to become well-known and loved. Although when young he had wanted to pursue a stage career, which he gave up to support his father’s need for him in the family business, his musical ability (and a fine and powerful bass voice) led him to produce countless shows and songs which helped to raise charitable funds, and to provide entertainment e.g. at Purim spiels. He was also an accomplished artist and gave talks on the subject. But his greatest gift was the ability to teach children, and in particular to transfer to them his own love of Judaism which he had inherited from his parents. This aspect came to the fore when in 1959 he and his family joined EDRS.

He was a member for 57 years during which time he served on practically every committee (other than the Ladies Guild!) and was a member of Council for 20 years from 1966, five of them as Vice-Chairman then Chairman. In 1987 he was appointed as a Vice-President, and in 2009 as President for 5 years, during which time he celebrated his 2nd barmitzvah. Love of Judaism played a big part in his family’s life and it became the driving force of many of the activities he subsequently took on board.

At EDRS he helped to run services on Shabbat and the High Holy Days, and was part of a small team of lay readers who conducted shiva prayers. For over 25 years, strongly supported by his wife Myrna, he held Shabbat lunch and learning sessions in his home for pre and post bnei mitzvah children, several of whom went on to become teachers, rabbis or community leaders. In 2006 he started a chevra kadisha at EDRS which looks after the deceased prior to burial, and went on to help set up several chevrei kadisha in other Reform and Masorti communities. When he was not engaged on religious matters he was writing, performing and telling jokes in musical shows.

He was a regular volunteer at Ravenswood Village, where he led Shabbat Services and created prayer books for Shabbat and festivals. He served for many years on the Zionist Federation and the Board of Deputies. He recently won the Jack Petchey Award for his work inspiring young people, and the Lady Jacobovitz Volunteer of the Year Award. He was also Grand Master of his lodge and held a senior position within freemasonry.

Mitch Wax and Myrna Wilson were married in 1958. Prior to that Mitch had become the chair of the local Young Norwood, and the group acquired a new volunteer (Myrna) to whom Mitch made clear that she was not there just to find herself a husband! Mitch continued to work in the family business which he inherited after other family members had retired. During his career he became a Master Craftsman and received several industry awards, and this was not even his chosen profession.

He will be sadly missed by many, both young, old and in-between. He is survived by his wife Myrna, by his three children, Rabbi Lee Wax, Jo Sigalov and Steve Wax, all of whom are active in the Jewish community, and seven grandchildren.