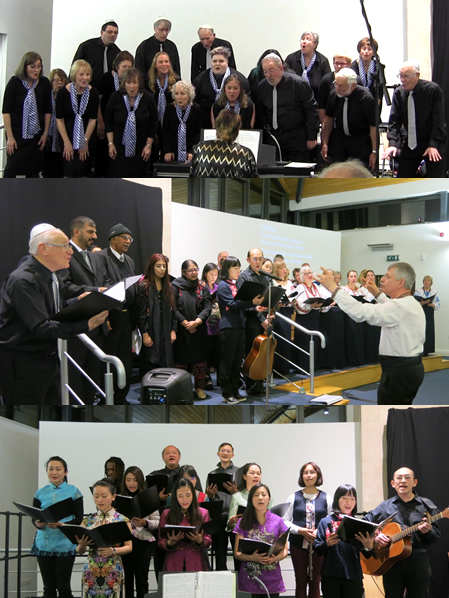 On the evening of Sunday 18 March, Menorah Synagogue hosted its fifth annual Choral Extravaganza. The evening saw people from many backgrounds and faiths gather together for an evening of friendship and fellowship through music as Morag Sanig explains.

An audience of over 200, including the Lord Mayor of Manchester and guests from the communities of the visiting choirs, watched and listened to performances from the Mriya Ukrainian Mixed Voice Choir, the Mandarin Fellowship Choir, the Siddique Group from the Azeemia Sufi Order Muslims and the Menorah Synagogue Choir.

All of the choirs performed varied and entertaining programmes and none more so than the Menorah Synagogue Choir, led by Ruti Worrall. They opened their programme with the beautiful ‘Mi Haish’ and ended with a rousing arrangement of ‘That Old Time Religion’. The Choir also showcased two of its sopranos (Emily Carp and Angela Rose) who performed ‘The Cat Duet ‘by Rossini with wonderful comic timing and cat-ears. The most moving song of the evening was The Erlking by Schubert, arranged for choir and two tenors by Ruti Worrall. Peter Worrall, who had to perform both solo parts due to illness, gave a beautiful and heartfelt performance which was supported by the choir at its best.

For the finale the four choirs gathered together on stage to lead the audience in a joyful sing-a-long with songs being sung with enthusiasm in Ukrainian, Mandarin, Urdu, Hebrew and even English.

When Ruti Worrall, planned the first Choral Extravaganza five years ago she hoped it would provide an opportunity for building bridges between faith communities, and it is fair to say that this is what the evening and the preparation for it does. It is no exaggeration to say that audience and choirs went home feeling up-lifted and perhaps knowing each other a little better.

Proceeds from the evening are going to the Manchester Interfaith Network and plans are already underway for the sixth Choral Extravaganza.