The play, titled “Don’t Call Me Annie”, explored the effects that the Holocaust continues to have on younger generations to this day. It was performed by synagogue members Rosy Akalawu Ellman, Lynne Nathan and Sharon Copitch, and was written and directed by Ruti Worrall, the director of the synagogue’s choir. 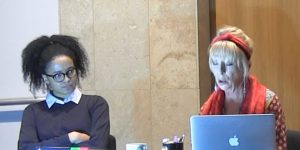 A photograph from the play featuring Rosie Akalawu Ellman as Annie and Lynne Nathan.