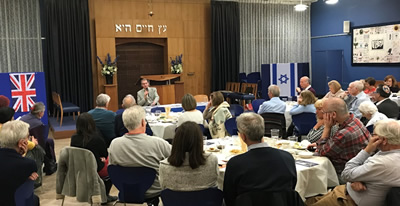 Avi Marco of Finchley Reform Synagogue (FRS) reflects on the shul’s exhibition and community event marking the centenary of the Balfour Declaration.

The Balfour Declaration of November 2nd, 1917 was contained in a letter from the Foreign Secretary Arthur Balfour to Lord Walter Rothschild, a leader of the British Jewish community, for transmission to the Zionist Federation of Great Britain and Ireland. That letter was one of the earliest public expressions of support for Zionism by a major political power and in 1922 was given legal effect by the League of Nations with their establishment of the British Mandate over Palestine.

The concise 67 words of that letter will no doubt continue to fuel debate among historians and politicians for decades to come. What was the Declaration’s role in the road to the reestablishment of Jewish national sovereignty? Was it as significant to the achievement of the Zionist dream as we might be lead to think bearing in mind the number of events, discussions and demonstrations occurring at its centenary?

Broadly, within Jewish communities across the UK, the centenary of the Declaration has been addressed in a celebratory manner, in part perhaps as a response to a sustained campaign for an apology from the British Government from those who may see themselves as pro-Palestinian. Many in the UK Jewish community have seen in that campaign an attempt to extend efforts to delegitimise the State of Israel by casting the Balfour Declaration as an illegitimate colonial instrument that should be nullified.

The FRS Israel Committee chose to mark the Balfour Centenary in a celebratory manner, albeit without ignoring or dismissing other narratives. This was done through a month-long exhibition in the main shul hall and an event that was held on the last Shabbat of October.

The exhibition, created by members of the Israel Committee, consisted of 11 posters; an introduction to the Declaration and one poster for each tenth year since 1917. The exhibition sought to provoke questions and discussion as it chronicled events that occurred as the aspiration expressed in the Declaration was transformed into the reality of statehood and developed into the Israel we know today. The events captured in the posters, some well-known and other less so, narrate Israel’s journey from an idea supported by the Manchester Tailors Union, through tragedy and struggle to an independent state facing the challenges of war and political upheaval while also developing a rich world of culture and science and grappling with astonishing social change culminating in the 2017 Tel Aviv LGBT+ Pride attended by upwards of 200,000 people.

The FRS Balfour Centenary event held on October 28th was well attended. Almost 60 participants were greeted with a celebratory spread of salads, dips and cakes as they gathered around tables to sit and watch a challenging film and then engage in a community conversation. The film, “The Forsaken Promise Centenary Edition” (shown with the kind permission of Hatikvah Films) explores the evangelical Christian roots of the Balfour Declaration and argues that Britain reneged on the promise in the Declaration. The film is not an easy watch and undoubtedly presents just one perspective on a very complex series of events.

It was chosen for that very reason – to serve as a catalyst for a meaningful community discussion of the Balfour Centenary, at which a spectrum of voices was heard from the floor and an open an honest dialogue ensued. The discussion was chaired by David Stone, who is the Emeritus Professor of Paediatric Epidemiology at Glasgow University with a long association with Israel and a profound interest in the subject of the Arab-Israel conflict on which he speaks widely. David gently navigated through the views and thoughts that were shared by participants and managed to maintain the celebratory tone of the event while facilitating an examination of differing viewpoints.

Huge thanks are due to the members of our small Israel Committee who worked tirelessly to produce the exhibition and arrange the event. The committee aims to foster pride in Zionism that comes with a deep love of Israel and is, at the same time, confident in being able to wrestle with Israel.