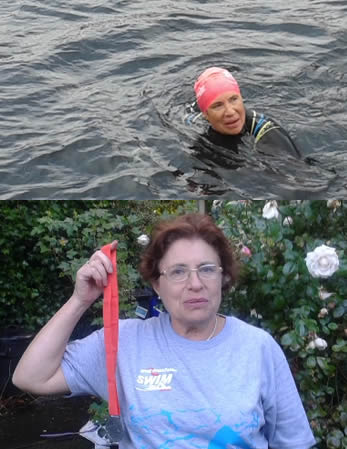 Manchester Reform Synagogue member, Rosemary Taylor, has dipped her toes in the water again. When she had to stop running for good causes because of her knee problem, it didn’t stop her swimming instead.

Last weekend, Rosemary helped to raise money on behalf of the charity, Freedom from Torture, by swimming a distance of 1 mile around Salford Quays. It is the third time that Rosemary has done this event, and she is not a first timer to fund raising, either, having previously taken part in the Manchester 10K over several years.

On this occasion Rosemary pledged to raise £4000 for her chosen charity, and – at the time of writing – her current total stands well below this, unfortunately. Freedom from Torture is a human rights organisation that exists to support survivors of torture. They provide medical and social care, practical assistance, and psychological and physical therapy.

You can continue to donate to the charity on Rosemary Taylor’s ‘just giving’ page here.

Rosemary, aged 70 is a former Council member and chorister at Manchester Reform and Menorah Synagogues and works as a breastfeeding counsellor with the National Childbirth Trust.