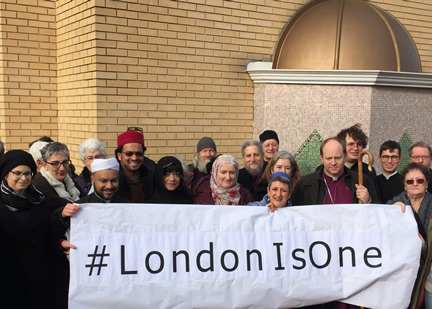 Londoners of all faiths and beliefs formed a human circle of solidarity around the Wightman Road Mosque during Friday prayers on 3 February.

The event was supported by Reform Judaism, the Islamic Society of Britain, the Christian Muslim Forum, the Faiths Forum for London and Hope not Hate.

Following a week that saw murderous violence against Muslims in Quebec it was a demonstration of solidarity with our Muslim brothers and sisters at this time of international turbulence.

We believe that ‘London stands as one’, and are determined to work peacefully and constructively to ensure Britain follows an open and diverse path.

Rabbi Laura Janner-Klausner, Senior Rabbi to Reform Judaism said: “This week started with President Trump’s executive order, and is ending with news that anti-Semitism is at record levels in the UK. Tomorrow, we will show our determination, as minorities and people of different religions, to stand together and protect one another.”

Ajmal Masroor, Chair of Islamic Society of Britain: “After recent events in the US and Canada, we received calls from leaders of many faiths and beliefs wanting to show solidarity with British Muslims. I feel these leaders wanted to relay the message that we are all equal citizens of this great country and that we must stand as one when any of us feels isolated or scared. We are deeply touched by this real show of support”.