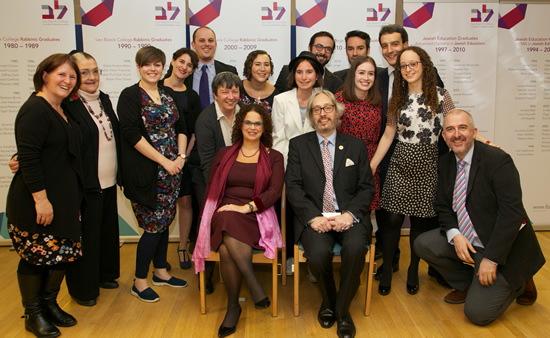 Noeleen Cohen, Chairman of the Board of Governors, welcomed guests including Councillor Sury and Mrs Tara Khatri the Deputy Mayor and Mayoress of Barnet; alumni of its rabbinic and education programmes including its first alumnus, Rabbi Lionel Blue OBE; Patrons and Friends of Leo Baeck College; current students and staff of Leo Baeck College.

The Principal of the College, Rabbi Dr Deborah Kahn-Harris, gave an inspirational address recounting the history of the College and the importance of securing its future as the beating heart of Progressive Judaism in Europe.

During the reception, Rabbi Pauline Bebe, the first woman rabbi to lead a congregation in France, and the world renowned anthropologist and academic Rabbi Professor Seth Kunin, received Fellowships from the College marking 25 years in the rabbinate. Rabbi Dr Deborah Kahn-Harris also received awards from the Avraham Geiger College in Potsdam and from the Leo Baeck Education Centre in Haifa marking 60 years of education excellence for Leo Baeck College.

This service marks the start of a year filled with anniversary celebrations that include the inaugural Rabbi Lionel Blue Lecture on 15 March 2017 with Rt Rev and Rt Hon Archbishop of York, Dr John Sentamu as guest speaker, as well as the Leo Baeck College 60th Anniversary Dinner on 6 June 2017.