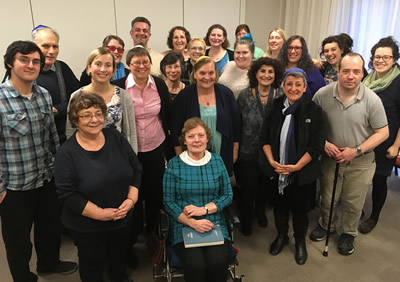 The first call-up was for Leeds. Several individuals came over to the temporary bimah we’d put up, and said the blessing. Second was Manchester. Another bunch of people left their seats and encircled the sefer Torah. And the third call-up was for the online contingent. Along came the rest of us to partake of the mitzvah.

What on earth were we doing?

The students who form the first cohort of the Northern Learning House were conducting their first Shabbat service together, at a residential weekend in a Salford hotel. We had been expertly prepared having been taught service leading from Rabbi Debbie Young-Somers’ Shaliach Tzibbur course.

Debbie herself taught the course online – student rabbi Kath Vardi taught it at Menorah, and Rabbi Esther Hugenholtz at Leeds. Students came from all over the north – Glasgow, Sheffield, Newcastle, Southport as well as the big cities. Once we’d absorbed the theory, our practical was actually holding a service. To make it just that little bit more difficult, three rabbis were in attendance – Rabbi Debbie, Rabbi Esther and Rabbi Laura Janner-Klausner. Not at all intimidating, then…

Yes, we stumbled in places. And yes, we started in one tune, and found ourselves singing another. But – we did it! And discovered that leading a service with our fellow students was one of the most exciting and meaningful things we’d done. We all had a sense of shared ownership, and realised we knew what we were doing more than we thought we did! We watched our fellow students gain in authority, and admired their humour, serenity and insight. The Shaliach Tzibbur course actually worked!

During the weekend, the rabbis present led us in further reflections, discussions and other activities, and of course there was time for the usual catching up with old friends and making new friends. We held havdalah in the car park so as not to set off the fire alarms, which astonished some of the passers-by, especially the young man who was so kind as to lend us a lighter.

Our Shabbat together made all our hard work worthwhile, and has inspired us to go on to learn more. Rabbi Norman Zalud will be teaching leyning, or the ritual chanting of the Torah portion and haftarah, and there are plans afoot to teach d’var Torah writing and more. A new generation of lay service leaders is coming to a synagogue near you!