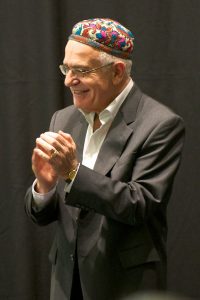 Laughter as well as tears were the order of the day when Menorah Synagogue (Cheshire Reform) held a Memorial Service for Rabbi Brian Fox.

Rabbi Fox, who died recently in Australia, served Menorah for almost thirteen years and left an indelible impact on the congregation, not least as the driver for the state-of-the-art building and a beautiful new Sefer Torah.

Everyone felt they had a special relationship with Brian. Tributes were paid by the Christian clergymen who not only bonded with him but also attended the weekly shiurim in his home. Previous Chairs recalled their highs and lows of dealing with “a force of nature”. Poignantly, Ruti Worral, leader of Menorah’s famed choir, who bonded with Brian through love of music, sang El Moleh Rachamim. The choir sang beautifully in his honour.