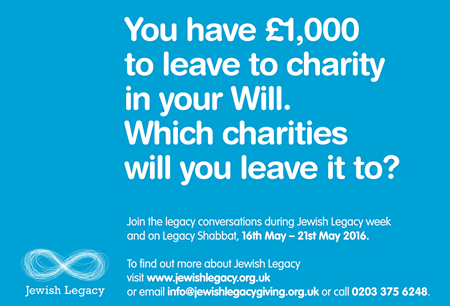 Jewish Legacy is a consortium of 47 cross communal charities working to highlight the importance of legacy giving to the Jewish community.

Jewish Legacy was formed little over 4 years ago and, since then, has worked tirelessly to inform the community about its importance and, at the same time, challenge current perceptions about legacy giving.

Legacy giving does not simply apply to the older community; it is not simply for the very rich and it is not a complicated concept.

Additionally, “The older people are (and the more religious they are), the more they give”.

Although “60%” is a relatively positive figure, the fact that the community does not prioritise Jewish Charities is concerning.

The Jewish community represents as little as 0.5% of the population in the UK and, if we, as the tiny community that we are, do not prioritise helping our charities, who will?

Jewish Legacy Week is now underway, culminating in Legacy Shabbat on 20th May. Groundbreakingly, Reform Judaism, Liberal Judaism, the United Synagogue, Federation of Synagogues and Chabad Lubavitch are working together to highlight the importance of legacy giving. Together we ask that the community thinks about and discusses legacy giving and, even better, adds one or more of our Jewish charity partners to the beneficiaries in their will.

It is a huge opportunity to strengthen our community by supporting the vital services that our charities provide.

Find out more about Jewish Legacy Week and Legacy Shabbat.